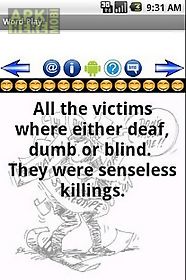 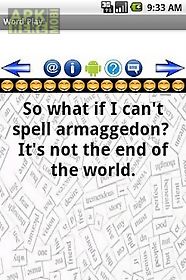 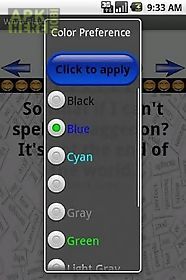 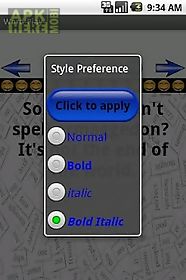 Word play jokes app for android description: over 1150 verbal wit based jokes on the meanings and ambiguities of words puns clever repartee etc.
Think you re funnier then submit your own jokes for inclusion in the app and get the credit too.
Warning these jokes contain swearing and topics of an adult nature and as such are intended only for grown ups.
Please do not download if you easily offend you will only get upset new jokes added weekly submit your own joke for inclusion in the app.
Move to sd card (android - 2+ only.
) This app will remember were you are up to even if you turn off your phone or update the app share with sms email add your own stories random joke button hold the left arrow to go back to the start hold the right arrow to go to the end link to developer s other apps in the market change the size of the text change the color of the text change the style of the text change the background rate the appexamples of whats inside (jokes are not censored in the app): i run a weight watchers class for w s and thieves.
Its all about weighing up the pros and cons.
I was waiting in line for a club last night and the guy at the door was checking ids.
He was taking ages.
I was coming home from work today and i saw a nun riding on a clowns back.
Now thats just virgin on the ridiculous.
The missus just found out i replaced our bed with a trampoline.
She hit the roof.
Major car collision on spaghetti junction: 12 injured 4 pasta way.
N.
B.
Permissions are required by the ad networks which keep the app free.
Disclaimer appsolutely fabulous takes no responsibility for the content of this app.
None of the jokes were written by anyone at appsolutely fabulous they were all either sourced form the internet or sent in by the users of this app.
We accept no blame for any offense caused care has been taken to remove offensive jokes however it you are offended by any of the jokes please report them to us via the app and we will consider the joke for removal.
Download Android 1.6+ Word play jokes.apk | 3MB 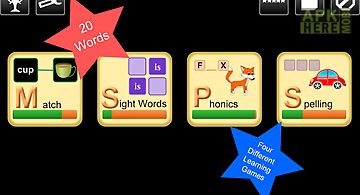 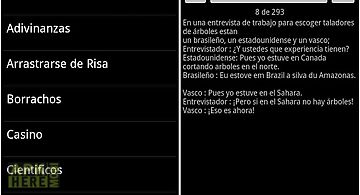 Jokes :-)
Thousands of jokes in many different categories. 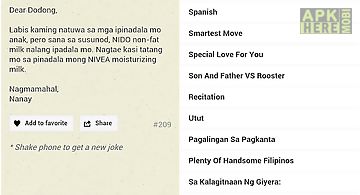 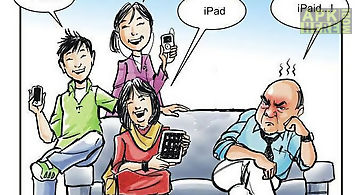 Picture jokes
Really funny jokes with pictures. Share the humor in these funny pictures with your friends on facebook email and watsapp. Short and very funny jokes! Enjo.. 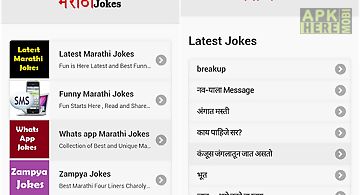 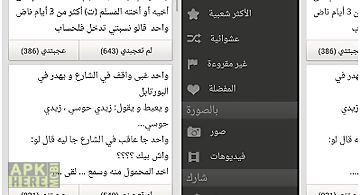 Algerian jokes
finally a dedicated application only for algerianjokesevery day a lot of jokes videos and pictures that will make you laugh! Offers jokes of all kinds alg.. 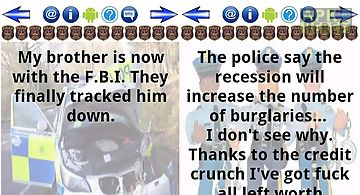 Police jokes
Love them hate them or are one! These jokes are for you. Over 1200 of the best jokes about the long arm of the law. Think you re funnier then submit your o.. 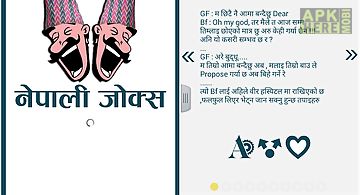 Nepali jokes
Nepali jokesthis app is built for you to read and enjoy awesome nepali jokes with your android device supporting from version - 1 and above. Features: only.. 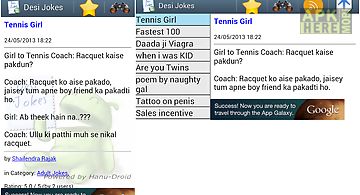 Desi jokes
Get the best and the most hilarious latest desi (indian) jokes on your android mobile. Get new jokes daily via push notification. Crack them on your fiends.. 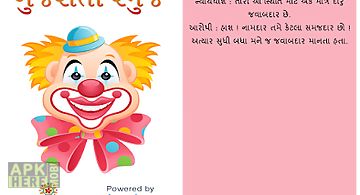 Gujarati jokes
gujarati jokes ( ramuj ) is a fun application for our gujarati language lover consumers. This is a product by gujarati pride group of apps. The app contai.. 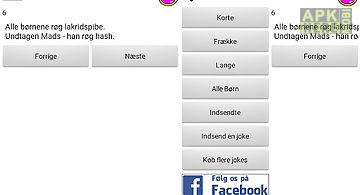 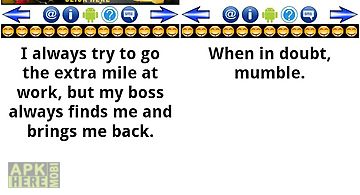