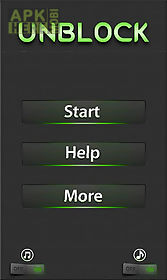 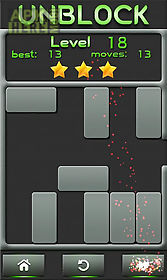 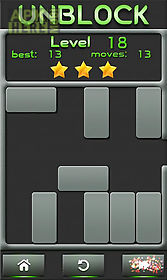 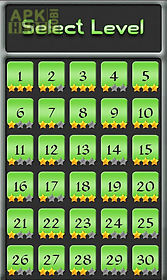 Unblock pro free game for android description: Unblock pro is a simple and addictive sliding puzzle game.
The goal is to get the red block out of the board by sliding the other blocks out of the way.
You can start but you 39 ll never be able to stop!
And try to get all 3 stars in every puzzle.
Unblock pro will provide you with hours of fun.
Worth hundred hours of playing to keep you challenged.
Will you be able to find a way to solve all the challenging puzzles? How to play: - horizontal pieces can only move left and right and vertical pieces can only move up and down.
- Move the red block through the puzzle.
- Less moves to win more stars.
Features: moves count sound effects 2000 different levels and more to come with continuous updates add another 500 levels share with your friends.
More and more levels are coming soon please pay close attention to our updates.
Get this free android game today.
If you like brain training games logic games math games and other mind challenging unblock games you will love unblock pro.
It is so nice and challenging!
If you like this game please rate it and recommend to your friends.
Give us a five star.
Thank you!
Thanks for playing!
We try our best to design the most interesting games but there must be some place not good enough.
If you have any suggestions please tell us.
Your 5 star reviews or comments or suggestions of improved is the best support for us.
Very thank you!
Our new game jewels quest and jelly worlds was released on google play you can click the more button to download it.
Thank you very much.
Download Android 2.3+ Unblock pro free.apk | 3MB