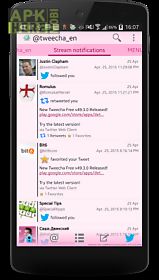 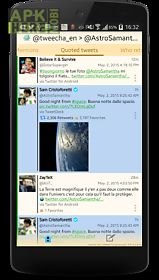 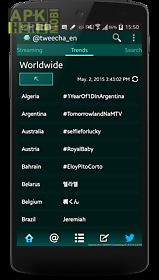 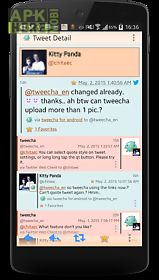 Tweecha for twitter app for android description: Thank you for having a look.
Because we have reached the limit of user authentications set by twitter you can not authenticate another.
If you would like to use tweecha please consider the authentication enabled tweechaprime donation version.
Tweecha is an award winning 1 ranked app.
It s easy to use and has a has many great features.
Enjoy a more confortable twitter!
Featuresuser friendlinessadds user friendly operations that are not in the official app.
Accident preventionwith tweecha s intuitive design you ll never need to worry about accidental follows tweets retweets and favorites anymore!
Easy communicationyou can view the original tweet while replying as well as view whole conversations easily!
Tweet timedisplay the exact time of a tweet not only the minutes ago displayed on the official app.
Shutout unwanted tweetsmute tweets that have specific keywords and hashtags.
Free supportsupport is done by the developer and updates are done according to requests.
Other useful features manage multiple accounts realtime notifications (reply dm follow retweet liked) user timeline over streaming show thumbnail images on timeline color label for user mute user app hashtags retweets and text conversation view on tweet detail screen menu to access each timelines and each list.
Pull to refresh save image show read status (orange line) mark as read or unread move to unread position show user information when clicking user profile image easy access: change lists with swiping pushing button and from menu.
Showing full size image on display translation function (long press on tweet work with google translation app) rich friends information with tweets favorites follows followers and so on.
Following list followers list.
Tweet ways: tweet replay retweet qt favorites.
Sharing: share tweet share text and share url search user search tweet.
Save search keywords multi language support change tweets layout size customize:
Download Android 2.3+ Tweecha for twitter.apk | 3MB 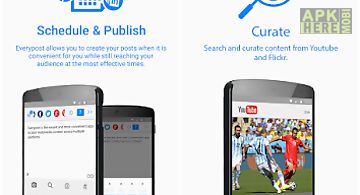 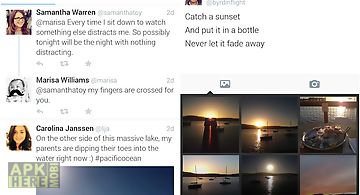 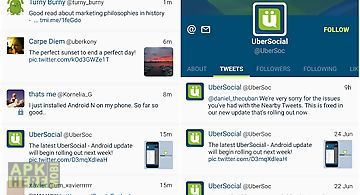 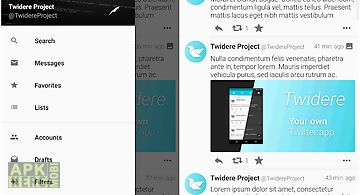 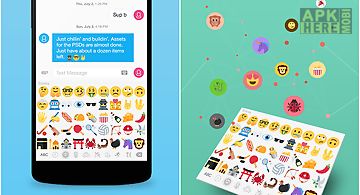 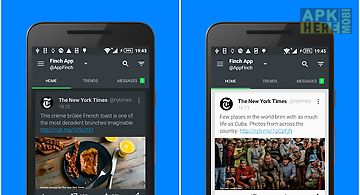 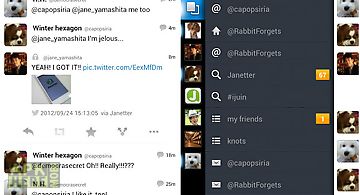 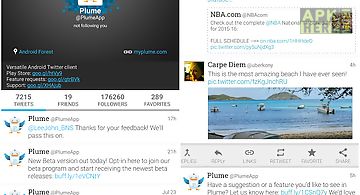 Plume for twitter
Plume is a beautiful and completely customizable twitter app that will revolutionize the way you use twitter! Brought to you by the authors of the popular .. 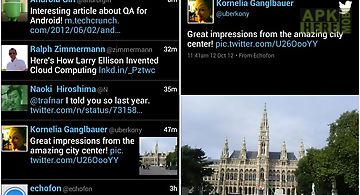 Echofon for twitter
Echofon is the easy to use super fast twitter app that smartly syncs across all your devices. Wrapped in a beautiful clean interface echofon for android pa.. 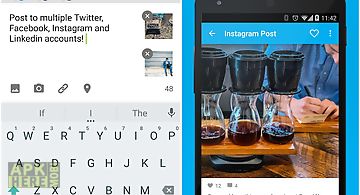 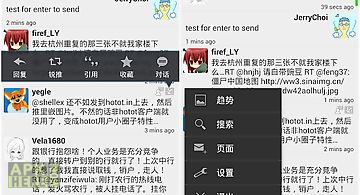 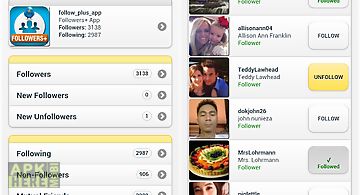